Speaker design hasn't changed much in the past 50 years, and stereo equipment that I lusted after in high school in the 80s is very affordable these days. Craigslist is your friend and CL/eBay search engines such as Searchtempest which can export OPML for import into your favorite RSS reader are a winning combination. I've gotten good deals on everything from speakers to welders to espresso machines by carefully following the market and jumping on good deals when they show up in RSS.

A few years back I bought a pair of Klipsch Heresys to replace my old Boston Acoustics speakers which I'd gotten in high school - the foam woofer surrounds had decayed over the years and were to the point of falling apart. The Heresys were a huge upgrade in speaker technology despite actually being older than the BAs - as near as I can tell mine date to 1979-81. By the way, the pair did fit in the back of my Smart... barely.

I've been enjoying the Heresys for a while now, but in recent months they started to exhibit a problem - I would not have tweeter on the right speaker when I started playing music after not playing any for several hours or days, but the problem would remedy itself after a few seconds of play at moderate volume and then not come back.

After reading some forums I came to the conclusion that the culprit was likely the over 35 year old capacitors in the crossovers (the part that splits out the signal three ways for the woofer, squawker (as Klipsch calls the midrange), and tweeter. The crossovers were Klipsch Type Es, assembled on a slab of wood and screwed to the inside wall of the speaker. The caps were 2 µF Aerovox oil filled capacitors, stamped "NO PCBs" (whew!). People who are anal about this sort of thing claim that the original capacitors in this application are due for a refresh 20 years after being made, so mine were well past their sell-by date.

As you can see from the schematic, it's pretty clear that an issue with the capacitor in series with the tweeter could result in the problem I was observing. 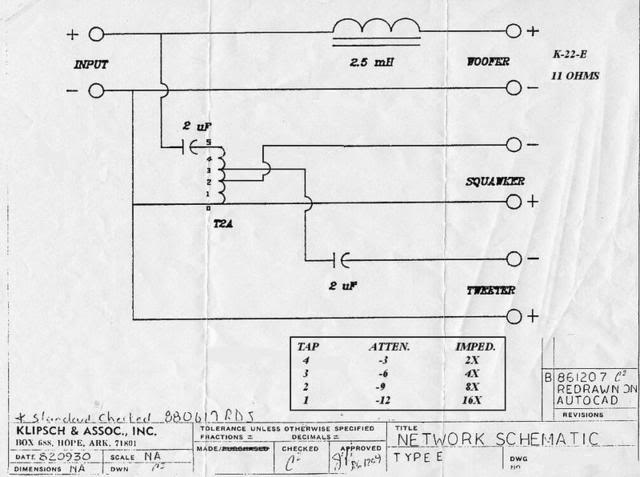 Of course I could have just gone out and bought some high quality capacitors and appropriate mounting kits to keep them from flopping around or vibrating inside the case, but it made sense to just order a kit for one-and-done convenience. Fortunately, there's a guy, Bob Crites in Russellville Arkansas who knows a lot about Klipsch speakers and seems to make a living selling retrofit kits, upgrades, and replacement parts. Bob doesn't seem to believe in e-commerce with shopping carts and all; you send him email about what you're looking for and he promptly sends back questions and caveats, and you agree on what you're buying, then get a Paypal invoice. I question the scalabilty but maybe the personal touch is more important to Bob. In any event, the customer experience was great.

Not long after, I received a package in the mail from Bob. I immediately set it on my desk next to the OpenEVSE kit and covered it with other stuff, because where's the fun in promptly following through on one's projects? So many things to do, so little time...

Three months hence, I finally got around to swapping out the capacitors. This is roughly a thirty minute job per speaker, between removing the back, disconnecting eight leads per side, removing the crossover, replacing the capacitors, and then reversing the process to put it back together. There was a slight scramble at the beginning when I realized that I needed to find the portable butane soldering iron and hot air gun to handle the shrink tubing - my Weller soldering station, while nice, is not useful as a hot air source.

Here are some before and after shots. The capacitors Bob supplied are Sonicap Series 1, which is the low-hype end of "audiophile" - exactly what I'm looking for. I don't feel the need to pay through the nose for a set of magic unicorn-dust capacitors that some guy who claims he has a golden ear provides [fill in audiophile intangible benefit here]. I like music that sounds good, detailed, and clean. If the changes wouldn't pass a double-blind test or can't be detected with an appropriate microphone and signal analysis software (I almost wrote "meter" there, but I'm old school), I don't find it that interesting.

Here are the before and after shots: 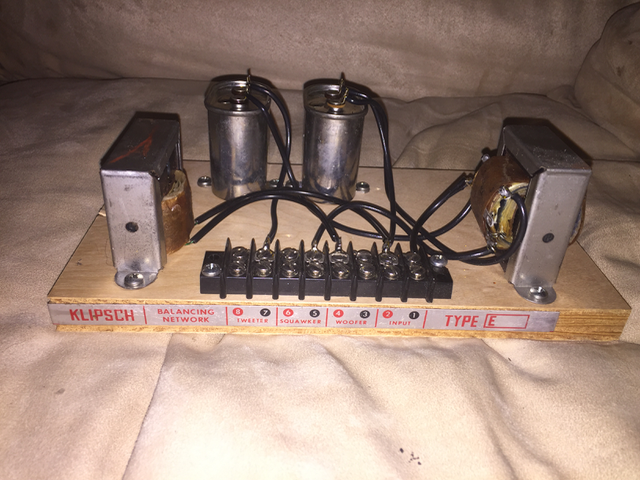 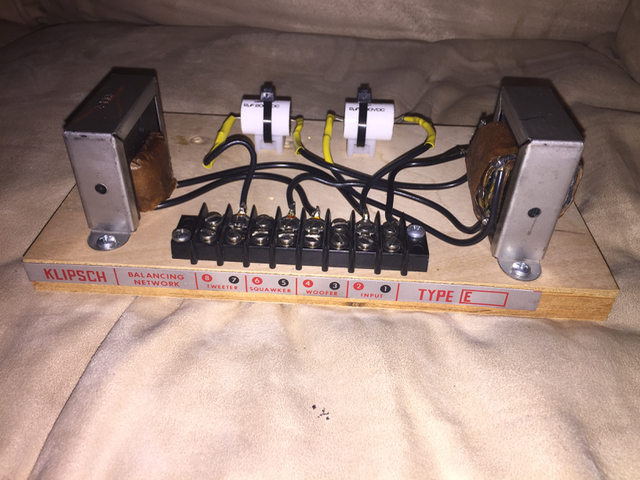 So, what are my thoughts? The problem seems to be fixed and I can't get over the sound improvement, though how noticeable it is varies widely with the source material. I can tell a big difference on closely micced acoustic guitars where you can hear the artist's fingers or pick against the strings, bells and glockenspiels, and sharp envelope percussion - particularly stuff like the TR-808 or similar vintage custom drum pads used by Kraftwerk.