My colleague Wes recently sent me a link to makezine article on making an adaptor octopus for running welders, plasma cutters, etc. Wes' comment was "I feel like there are a lot of ways for this to go badly for someone who isn't already familiar enough with this stuff to actually write the article."

Indeed, the adaptor octopus looks like it was designed by the Bad Idea Fairy. There's nothing inherently wrong about building such a device, but it is helpful to make sure that the device is to-code to the extent possible, and absolutely not dangerous-and-stupid. Optimally, you want it to satisfy both constraints, especially if writing a HOWTO for novices.

A sidebar to expound on "dangerous and stupid" is probably in order. I've installed a dishwasher without a dedicated circuit for it (multi-year-temporary measure to be fixed in a subsequent remodel). That is not to code, but isn't dangerous and stupid either, since it was a common arrangement at one time, the other receptacles on the branch circuit aren't in a place where they're likely to get a toaster or microwave plugged in, and so nuisance trips (the whole reason the dedicated circuit requirement got put into the NEC to begin with) have been a non-issue.

I looked at the picture of the finished product in the article Wes sent me and thought "gee, I'd mount that on a piece of plywood, close nipples and thin sheet metal in a load center aren't meant to be structural". 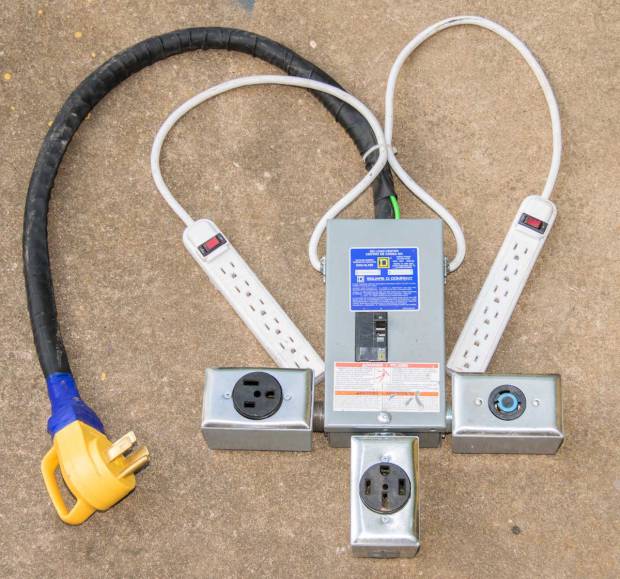 Then I started looking closer and reading the article. The next thing I noticed was selection of the wrong type of entry fitting for where the big black SO cable (probably actually type SOOW - Severe, Oil-resistant jacket, Oil-resistant insulation, Weather-resistant) enters the load center - the proper device is a strain relief gland nut connector, but this guy used an NM (aka Romex) clamp instead.

Upon closer inspection I realized that the entire length of the main power cable is wrapped in electrical tape. Why is that? Why look, next to the NM clamp there's a green ground wire peeking out. They didn't really... oh yes they did! See section 4 of the article, but

If not PacBell, then who was the LEC there? Not C&P like much of the area to the east. Actually Washington Dulles was GTE territory (which we used say stood for the Great Telephone Experiment before they, too, ended up being part of Verizon).

I checked in with my friend Sam Brown who is an expert on the many peculiarities of telephony in the DC metro area and he reminded me that there were actually two kinds of pay phones at Dulles - "local" (703-661, the "native" exchange for DLLSVAXARS0) and "metro" which were effectively FX lines out of Lorton, VA which was also GTE territory at the time but happened to have metro DC as part of its local calling area (rate center VALORTONMTRO instead of VADULLES).

EDIT: Sam reminds me that Lorton was not automatically Metro. Standard Lorton was 703-690. In Lorton and Dulles Metro was a built-in FX service. In the rest of GTE territory, one could pay a much larger amount for such a line. Lorton and Dulles had the distinction of being the only places that were local to most of GTE-Land (Manassas, Woodbridge, etc.), the District, and Northern VA. Otherwise, in the old days, even Fairfax was not local to any of these outlying nearby communities.

Isn't it great to live in the future with VoIP service where I pay only what amounts to call termination fees regardless of distance and it's fractionally cheaper to call Toronto than to call next door?

I digress though. McClane would have a hard time making a pay phone call today, not because his arms aren't long enough to reach the nearest Pacific Bell phone, but because pay phones are a vanishing breed. Witness where the pay phones used to be at Dulles (picture taken late summer).

If you zoom in, you can see the blank wall plates where the phone jacks used to be.