Kim and I have a total of three Igloo 94 quart marine coolers (the big white ones that people take deep sea fishing with them). They have a great reputation for durability and come in at a reasonable price (around $130 at West Marine if I recall correctly).

You can get larger coolers and there is a certain temptation to that since a larger volume lets you hold more ice. If wall thickness (and therefore insulation factor) remain roughly constant and you ignore factors like how often the cooler gets opened, how long your ice lasts is basically the ratio of the mass (or volume if you like) of ice which you start out with to the surface area of the cooler. Since this scales less than linearly with the volume, it would make sense to get the largest cooler possible...

Then you run up against two factors: price, and mass when you have the sucker full. Igloo makes coolers that go all the way up to 160 quarts. I have had to help move the big ones full of food and ice. Going from 94 to 160 turns an easy two-person job into a pain in the butt. Moreover, the price is well more than double the cost of the 94 quart coolers, so we seem to be in a bit of a sweet spot here.

Remember I said that the Igloo coolers had a reputation for durability? Note that I used the D word, not the I word (indestructability). You can certainly damage one by being careless, negligent, or stupid.

Back in the fall of 2013, I was some combination of the above and left a cooler in the grass next to the driveway, inverted, to air out after a party where we served drinks from it. After a couple (ok, maybe more than a couple) of months it snowed and while clearing snow I managed to hit it with the tractor bucket, denting the outside and cracking the inside. Then I failed to mark the cooler unusable so when packing for a camping trip in 2014 it accidentally got filled with ice, so I had to let it dry out for a number of months before I could repair it (melt water had gotten under the liner).

This is how I came to be repairing the cooler in the spring of 2015.

The latches got bent up when I hit the cooler, since it was sitting upside down with its weight partially supported on the top cover latches. I was able to order a set of replacement latches and hinges from Amazon. Since the Igloo people know people are going to abuse their stuff, replacement parts are available in the ordinary channels of commerce. The hinges turned out to not be messed up, so I stashed them in the toolbox.

Once I had functioning lid again I turned my attention to various online forums for a compatible compound to patch the inside of the cooler with. I am not sure if these guys use it because they happen to have it around for other repairs or if someone who knows what works with what (plastic wise etc) did some research that helped guide making it popular, but Marine Tex Rapid Set Epoxy seems to be the go-to repair compound for it.

On the downside, it is dark brown colored and does not blend in well with the color of the cooler.

On the upside, it seems to be holding fine after a year and a half. I followed the instructions on the label and roughed up the inner surface, applied one coat, then after it was dry roughed up a larger area and applied a second coat over the top. 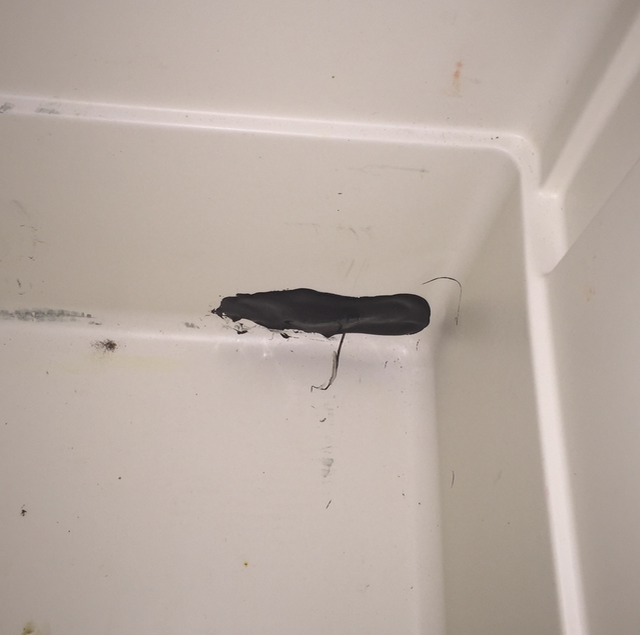