Better Nozzle for a Grease Gun

Are you inclined toward the kind of high mass hobbies that result in you owning tractors, machine tools, steam engines, coastal patrol vessels, heavy trucks, or other things of that ilk? Even if you just do maintenance on your own pickup truck, if you own the kind of tools or toys that come outfitted with Oscar U. Zerk's awesome little invention, then the odds are overwhelming that you own a grease gun too.

Now, if you own a grease gun, be it an inexpensive but decent Lumax like I have, a damn fine Lincoln, or even an awesome pneumatic one that dispenses straight from the drum, you've probably learned to hate the grease nozzle/coupler (the part that attaches to the zerk fitting) that comes with it. Always way too eager to pop off the grease fitting, usually waiting until you start pumping so grease squirts all over, and you needed three hands to begin with to properly set it on the fitting while holding the grease gun itself. And it was a pain to cinch down tightly even before the aforementioned grease got all over the place and made it slippery.

I read about the LockNLube Grease Gun Coupler in Farm Show, which if you aren't familiar with it is like Make but for country folk. It sure looked appealing, so I bought one, despite the fact that it cost half again as much as the grease gun.

Wow. What a difference. No lie, this thing cut by 2/3 the time it took me to grease the tractor (a dozen fittings or more). Not one pop-off or grease oozing out somewhere it shouldn't have. Well worth the $30.

So you get the rare RS testimonial. Joe-Bob sez check it out, and run, don't walk, to buy one if you have a grease gun. Note that there's also a long-nosed one available from the manufacturer's web site but not Amazon if you happen to be in the habit of reaching inside shrouded U-joints or something. 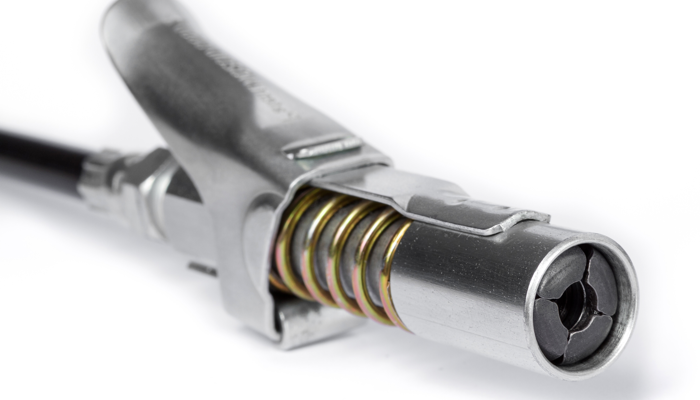