Keeping the portable EVSE from walking away

Continuing on with the theme of electric car chargers, most electric car manufacturers include one with the car. These vary in niceness from the fairly basic Level One-only example that came with my 2015 Nissan Leaf to the Tesla Mobile Connector aka UMC, which does Level One charging on a standard NEMA 5-15 receptacle but also has an assortment of adaptors available for plugging into common 208/240v power outlets for stuff like air conditioners, clothes dryers, welders, and RV hookups.

The one that came with my Bolt is an interesting case. Limited to 12 amps and officially 120 volts only, it is said to have been designed and/or built by Clipper Creek and through good choices in engineering has an autoranging power supply for its brains that is capable of running off 240v. Plenty of discussion has ensued on the forums. The upshot is that you can build a cheater that brings the various 240/208v receptacles out to a NEMA 5-15 receptacle, where you can plug in the charger (or even an extension cord, though the ones with a pilot light in them are not recommended!).

The risks and dangers associated with leaving a cheater and/or energized 5-15 extension cord with 240v on it lying around are left as an exercise to the reader. Choose wisely.

The increased likelihood that I'll be leaving a portable charger plugged in for an extended period of time makes it more likely that it'll walk off. Tesla owners supposedly don't have this problem because the charger locks to the car. The Bolt charger supposedly locks to the car too. Not sure how much I trust a socket locking mechanism. I'm also contemplating getting a Tesla to J1772 adaptor so I can charge from a Tesla Destination Charger in a pinch. I'm a little concerned about that walking off as well.

I gave the "how do I lock this down" some thought. It's important to have a threat model in mind when considering this sort of thing - it's impractical to guard against Lock Picking Lawyer or someone who's cutting my cables to steal them because copper theft is a thing. My concerns are more about casual swiping by fellow electric car owners, be they Tesla owners who are upset that I'm charging from "their" power source or J1772-charged car owners who want to pick up a spare EVSE.

With that in mind I thought about various possibilities that all seemed inconvenient or a costly pain in the butt. I'm lazy and don't want to build things if I can put something together out of repurposed stuff. Nor am I particularly thrilled with the idea of something I park on top of (get out of the car, get the thing, get back in, pull forward? No thanks!)

Here's what I came up with: A cable style gun lock (not a trigger lock) through the spokes of the alloy wheel and an appropriate-sized padlock with a shackle that is big enough to pass the cable but not the ends around both the EVSE cable and the gun lock wheel. Added bonus is that you can usually source a gun lock for free by asking at your local gun store. 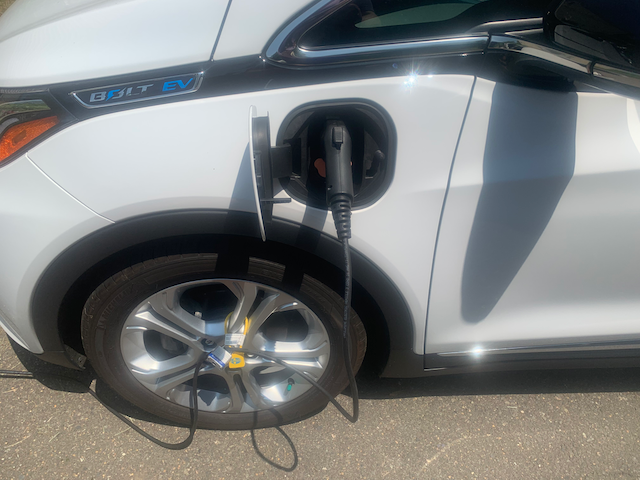 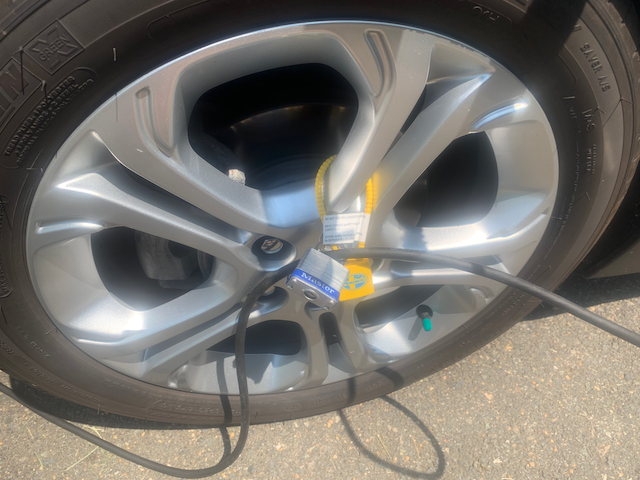 The gun lock that I got for free would not go around both adjacent spokes simultaneously; if you can't find a freebie in a big enough size you may have to resort to Amazon, Brownells, Cabelas, etc.