Electrify America - the most profitable mea culpa ever

I won't bore you with a rehash of Dieselgate except to note that as a finale Volkswagen paid a couple billion dollars as fines and further committed to spend $2 billion for clean-emissions infrastructure. In 2017 they created a subsidiary called Electrify America to implement this, with a commitment to inject $500mm/year of funding over the next four years.

Electrify America is building out nationwide, with plans to cover all major highways with what they refer to as a "brand-neutral charging network". I believe there may be language in the settlement that prohibits them from branding it as Volkswagen. Their DC Fast Chargers come in multiple sizes, with top charging rates of up to 350 kW (!). That is a heck of a lot of juice! Enough in fact to leave the scientifically curious scratching their heads.

Watts is volts times amperes, and neither the SAE-CCS nor the CHAdeMO connectors operate much above 500 volts (and usually more like 375 volts), so when you're talking lots of kilowatts (kW) you're obviously talking a lot of amps. How many amps you can cram through a wire (ampacity) depends on a few things. One is resistance. More resistance means more power loss which means more heat. Aluminum has more resistance than copper. Copper has more resistance than silver. Obviously making power cables out of silver is economically prohibitive unless you're at war and can hit up another branch of the Government to borrow some so the only way to make the resistance lower is to make the cable fatter (and thus more unwieldy). The equation is superlinear - to go from 100 amps to 500 amps at a given temperature rise, one needs a wire that is more than five times the cross-section, because even though you've multiplied the cross section by five, the surface area to radiate the heat away has not likewise increased by a factor of five. Another factor is permissible temperature rise - the National Electrical Code puts limits on how many wires you can bunch together and has guidelines for ultimate temperature for various kinds (insulation types) of wire.

So how do they do it? They're clever - I understand that the very largest cables (for the 150 and 350 amp capacity chargers) are in fact liquid cooled - with circulating fluid in the cable right there with, but insulated from, the wires. If this kind of gives you the willies you're not alone, but apparently it's safe - a lot safer than the suicide showers that your friends who vacationed in Central America told you about.

Electrify America charges a $1.00 session fee to start and $0.40/minute waiting fee if you've abandoned your vehicle plugged into the charger and are thus potentially blocking someone else from doing their business. So far so good; I'll tolerate the former and I especially support the latter. Reston Town Center at one point had car charger parking that was free for the first four hours, then successively $5, $10, $15, $20, $25 per hour, increasing every hour, for overstaying your welcome. The message was clear - don't hog resources; take your free charge and Get Out.

But then things start to go a bit sideways. Electrify America charges by the amount of time that you spend at their charger, quoting a figure that sounds somewhat reasonable based on maximum charge rate hypothetically drawn, not the actual energy consumed by your vehicle.

Imagining for a moment a hypothetical car that drew the top end of the allowable power in one of these ranges for every single minute it was charging and then fell precipitously to zero when it was done. Such a car or battery pack doesn't exist, but bear with me here. That would result in prices of $0.152, $0.278, and $0.168 respectively for the 350, 125, and 75 kW chargers.

The 27 cent price seems a bit steep but not unreasonable (residential tariff in Virginia is right around $0.12 per kWh) and they're certainly entitled to recover the costs of at least maintaining the infrastructure if not building it (remember, this was part of the settlement for fraudulent environmental tests; a license to print money shouldn't be in the agreement).

As I mentioned, though, such a hypothetical car doesn't exist. I have seen both my old Leaf and my Bolt, for instance, draw somewhat north of 41 kW under ideal conditions (391 volts @ 106 amps) but that starts to roll off as the battery approaches 55% full, or if the weather is too warm or too cold. Paying $0.21 per minute for charging on the less-than-75-kW tier is $0.307 per kWh... but the car doesn't charge that fast for its entire cycle either. 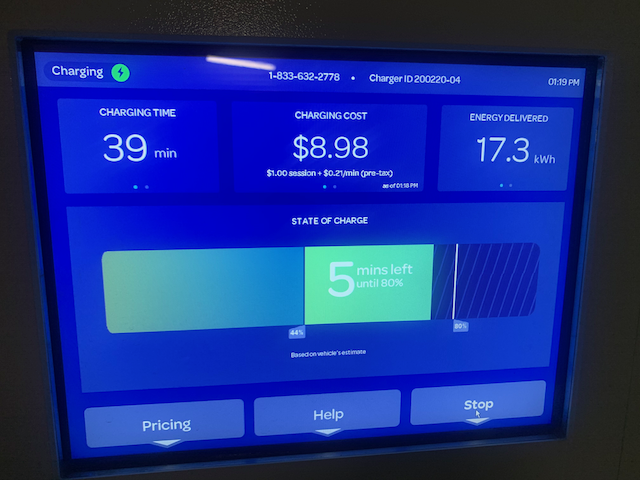 I felt like a bit of a chump going there for the express purpose of testing the hypothesis, just to make sure I hadn't somehow gotten it wrong. After all, I was handing over my cash to the second wave of public swindle from the folks who cooked the books on emissions compliance. But I took the hit for the team and regret to say it was worse than I had spitballed it at.

Tesla Superchargers, by the way, charge a flat $0.28 per kWh where legal, and $0.13 per minute where not. This falls into the "fair and equitable" bucket. Tesla is making a reasonable profit but isn't making out like bandits on this sort of deal.

Did I just say "where legal"? Indeed I did. It seems that a lot of states (somewhat fewer than half) have antiquated laws on the books that prevent resale of electricity by anyone except a regulated public utility, selling electricity at a price that is set by the government. While this makes a lot of sense in the context of guarding against apartment landlords ripping off their tenants who have no choice, the difference between a captive stationary customer base and a car charger should be pretty obvious.

I'm hardly the first one to notice this. Electrec, which some accuse of being tabloid-news for EV fanboys (guilty as charged, see what I did there?) had a story on this last year that described leaving "drivers with sticker shock and feeling ripped off by the end of the session".

Turns out California has banned such practices recently (see above story) or is at least in the process of making DCFC vendors remediate the problem over the next couple of years (which seems overly generous considering the obvious intent here). I've linked both the regulation, which is hard to get your hands around, and the Statement of Reasons, which makes it all make sense.

Those who know me well will be surprised to hear me come down in favor of following California on any regulatory regime, my general sentiment being that Cali never met a regulation it didn't like. I'm a big believer in the power of free markets, which is why I'm not in favor of instituting price controls here - Electrify America and EVgo (another gross offender in the obfuscatory fees department) should be able to price electricity however they see fit - but they must do it in a way that is obvious, clearly stated, and not misleading - just as gasoline pumps are required to clearly display the price per gallon or liter of product dispensed. Disallowing "gotcha" pricing is hardly heavy-handed as regulatory schemes go - it is more like not permitting fraud upon the unwary.

In summary, selling energy by the minute is unfair and does not allow the consumer to make an informed choice. The companies whose business model depends on gross markups will lobby hard against this. Stories about getting burned on charging fees are an impediment to electric vehicle adoption by people who aren't passionate EV nerds. Lastly, empowering rent-seeking behavior as part of a settlement for doing an end run around environmental regulations seems like it might not adequately discourage such behavior.