The Spoon Trick (sheet metal forming in the home)

A couple of years ago when Argos was a puppy, he chewed on my Ridge Wallet and put a bunch of tiny puppy-teeth-sized dents in the titanium side panels. While they have a lifetime warranty I didn't think it really covered puppy damage as opposed to normal wear and tear. As I was noodling on how to put it back to approximately the right shape, Tan said "rub it with a spoon".

Yes, you can take dents out of soft metals (or just generally form them from thin stock) from the back by rubbing them firmly from the back with a (spare, random, not the good silverware for when company comes over) metal spoon. Think of it as being sort of like the poor man's version of an English Wheel. I'm also reminded of the copper embossing we did in art class in third or fourth grade. For repairing the Ridge wallet it worked great, but I didn't take before and after pictures.

Fast forward a couple of years and I have an spare older MacBook Pro that I use in the basement lab and for taking to the datacenter, so I'm not putting my nicer one at risk. Wouldn't you know it, after I carefully set it down on the floor on edge leaning up against the rack, this one got kicked over in a moment of carelessness and took a ding in its baseplate from the corner of a UPS.

While largely cosemetic, the dent caused a misalignment of the edge where it meets the rest of the case which annoyed me every time I picked it up. I figured that taking out the dent in the interests of causing realignment was worth a try.

I removed the bottom plate and chose a plastic surface with just the tiniest bit of give as the backer - a 7.5 amp hour 12v gel battery from the e-recycle pile did the job nicely and didn't further mark up the outside of the case. 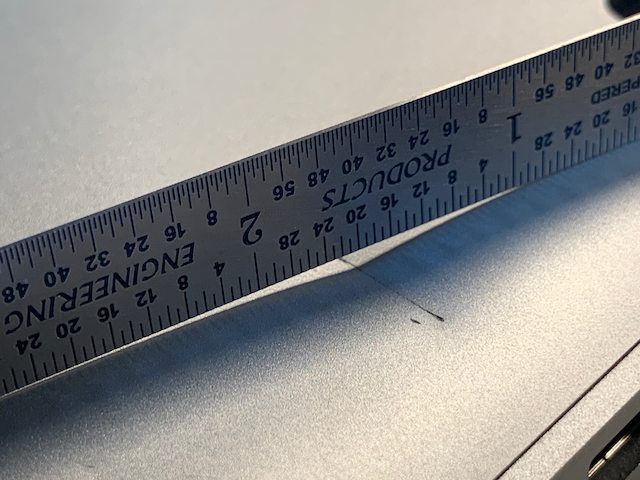 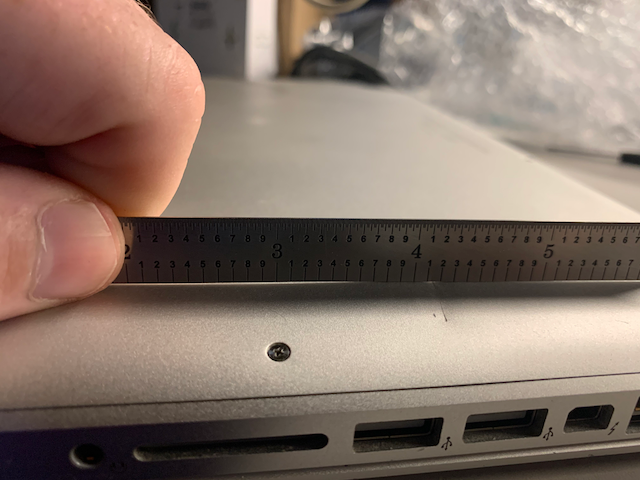 In case you're wondering, yes, straightening the dent out did in fact cause the edge of the bottom plate to come back into alignment with the side of the case, or at least close enough that it wasn't annoying me anymore.